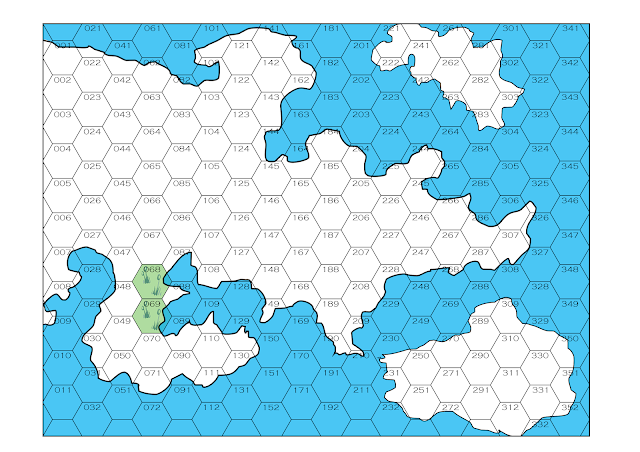 Dawn of Worlds is a world-building RPG available for free at the following link http://www.clanwebsite.org/games/rpg/Dawn_of_Worlds_game_1_0Final.pdf.

HAVING RUN SEVERAL GAMES OF DAWN OF WORLDS, though never to "completion", the format has always struck me as being eminently suitable for play-by-post, and I had a few ideas about how that could be facilitated. I was fortunate in that Garblag Games graciously agreed to host one such game on their discord server, and was even joined by YouTube stars (!) Pete and Ben of Garblag.

The game fizzled out around the beginning of the third phase, but we managed to squeeze a lot out of the initial two phases, and I thought I would share some of those experiences here. The intention of this post is to detail the manner in which the game's rules were applied, as inspiration for others intending to run a game of Dawn of Worlds online, and also to initiate some discussion about the game.

Players were able to expend points to alter one hex's terrain or climate.

The map measured 12 x 18 hexes, with each hex being numbered to better coordinate player actions. Working at a continental scale, each hex represented an enormous 240 miles, representing the immediate sphere of influence of a major city,a  tribe, a god-like monster or a significant geographical feature.

I set the map up in Photoshop so that terrain could easily be edited using layers, and so that I could also store additional information, such as climate: 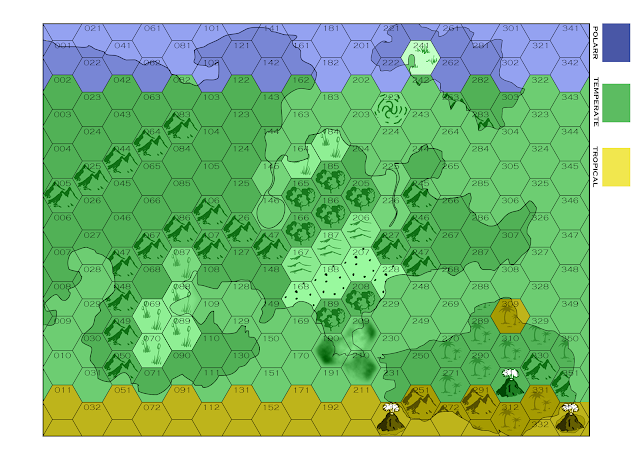 Terrain was partly influenced by climate, though players could, of course, expend points to circumvent these rules. I was guilty of issuing a few fairly arbitrary rulings with regard to this, and think I should have detailed these rules more precisely: there was one incident where I insisted a player's establishment of an arctic climate over a dense coniferous forest reverted it to sparse taiga, which was probably weird and petty.

At the start of each game turn, players are awarded 2d6 points to spend as they fit, based upon the powers table issued with the game: 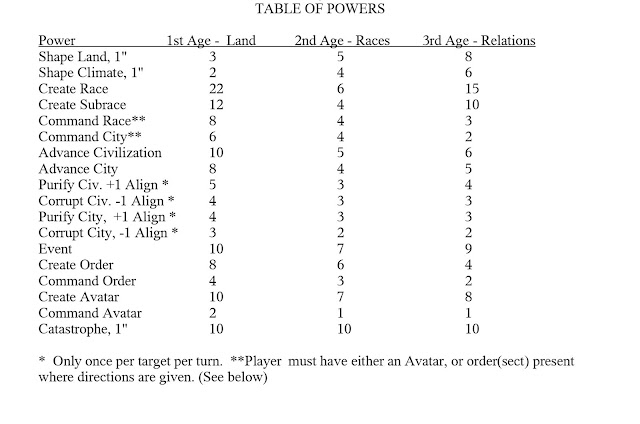 As we were playing over discord, we used a dicebot, with rolls being made in alphabetical order by the GM. One complicating factor was the bonus points awarded for finishing the round with five points or fewer (to discourage frequent stockpiling and to keep the game interesting), and for this I made a spreadsheet, but more on that in a moment. At the end of each round, I updated and posted the map and issued statements about points etc.: 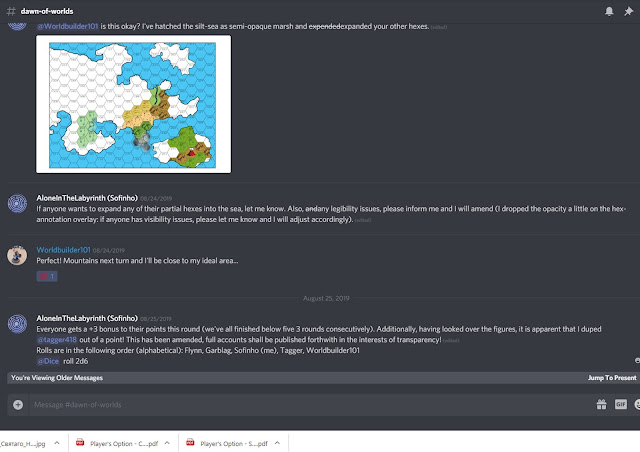 Initially the spreadsheet was used to track points on a round by round basis, but I got a little carried away, and used it to keep track of individual actions each round, as well as keeping a record of individual hex history. the document can be viewed online. I'm no spreadsheet expert, so most of the elements were copied over by hand (there was probably an easier way to combine txt from cells but I didn't look into it).

The spreadsheet can be found at this link:

If you can't wait until my next post, this will allow you to have a sneak peek of what went on in our races and civilisation/relations phases. Don't do that, it's against the spirit of Yule.

The spreadsheet later expanded to cover races and avatars, too.

Play in DoW is divided into three distinct ages, and the first of which is supposed to represent a more... glacial time frame (well, not quite, but nearly), at 500 years per round. To accommodate this , the players provisionally agreed to one post a week. Perhaps predictably, we all shot out the blocks with a great deal of enthusiasm, and the first age concluded in about ten days. We played through fifteen rounds, though it would have been possible to jump to the second age after ten rounds.

It's always a good idea to agree post frequency with play-by-post games, and to establish some kind of mechanism for players missing deadlines etc. This was not an issue in the first phase!

RACE CREATION
The first phase makes it very expensive to create races or species, so players are encouraged to establish the topography rather than populate the fledgling world. Nonetheless, when I saw one of the other players stockpiling points, I felt compelled to leap into action, and was the first to introduce a sentient species of semi-aquatic velociraptors. I honestly would not have done so if Flynn hadn't been saving their points for mysterious reasons, only to not then spend them on a species!

It was a glimpse of how the player/civilisation dynamic can affect gameplay, in a similar manner to many strategy games, and a foreshadowing of what was to come in phase 2: the arms race...

END OF THE FIRST AGE

By the conclusion of the fourteenth round 7,000 years had passed on our world, and we decided to enter the next phase. Three sentient species existed: the rock-skinned, humanoid Hymlac, the marsupial Macropustics of the north, and the aforementioned velociraptors, known as the Ook. What's more, in the southwest an enormous four-armed lizard, Magnificent-is-the-Dawn, loomed over the swamps, avatar of Worldbuilder101.
CONCLUSIONS


It's been fun to look back over the discord, and to realise that the map generation phase of the game was probably the most fun for all five players (myself included). Whether this was just the initial enthusiasm common to all such endeavours or something structural is ripe for discussion, but my suspicion is that it connects to the sense of anticipation rife in the opening few rounds. The canvas is being prepared, and the possibilities of what could lie ahead are infinite: ultimately, everyone will project their own expectations onto this space, and it's unlikely that the input of the other contributors will live up to those, regardless of their quality.

For my part, I really liked the eclectic weirdness that having five quite different role-players brought to the table, and by the time more races started to appear, the weirdness only intensified. Follow-up post to be written hopefully around next week, but if you cannot wait, have a look over the spreadsheet.
at 11:40 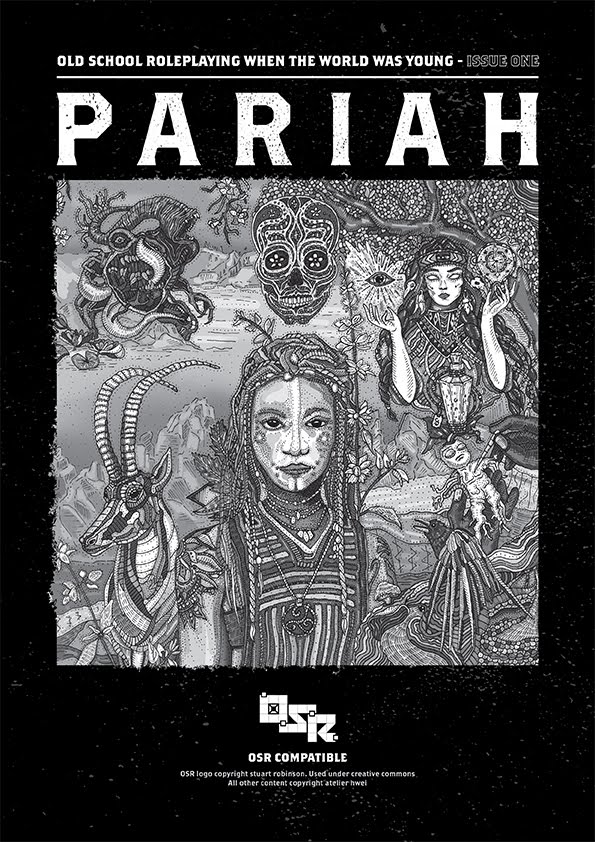 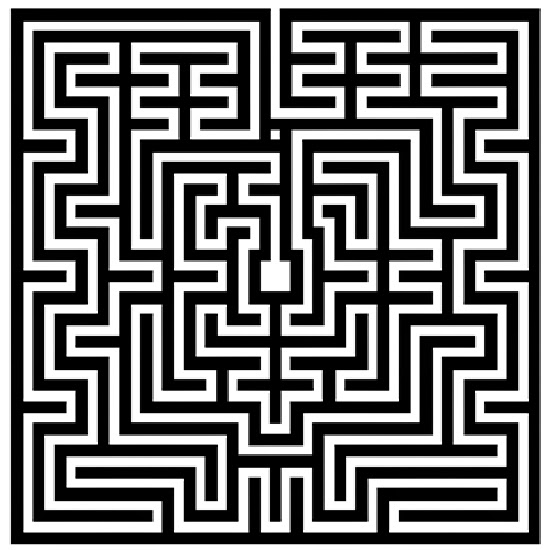 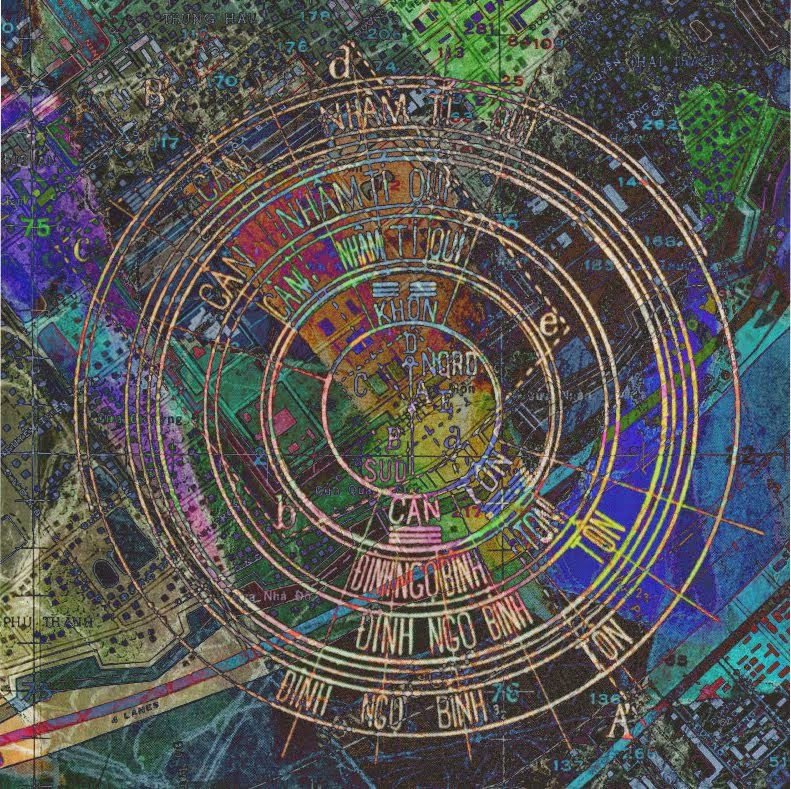 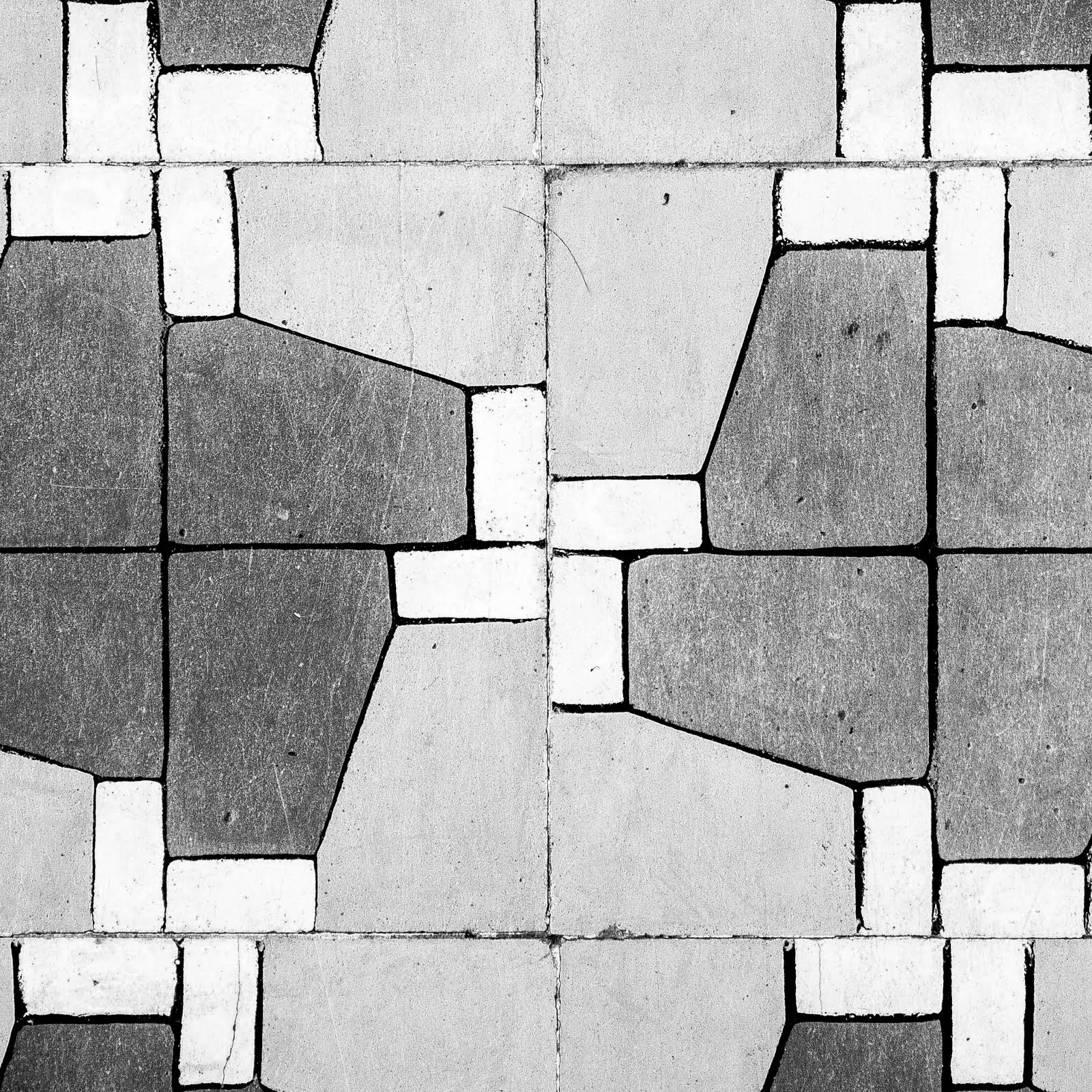 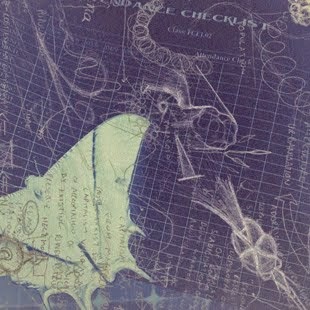 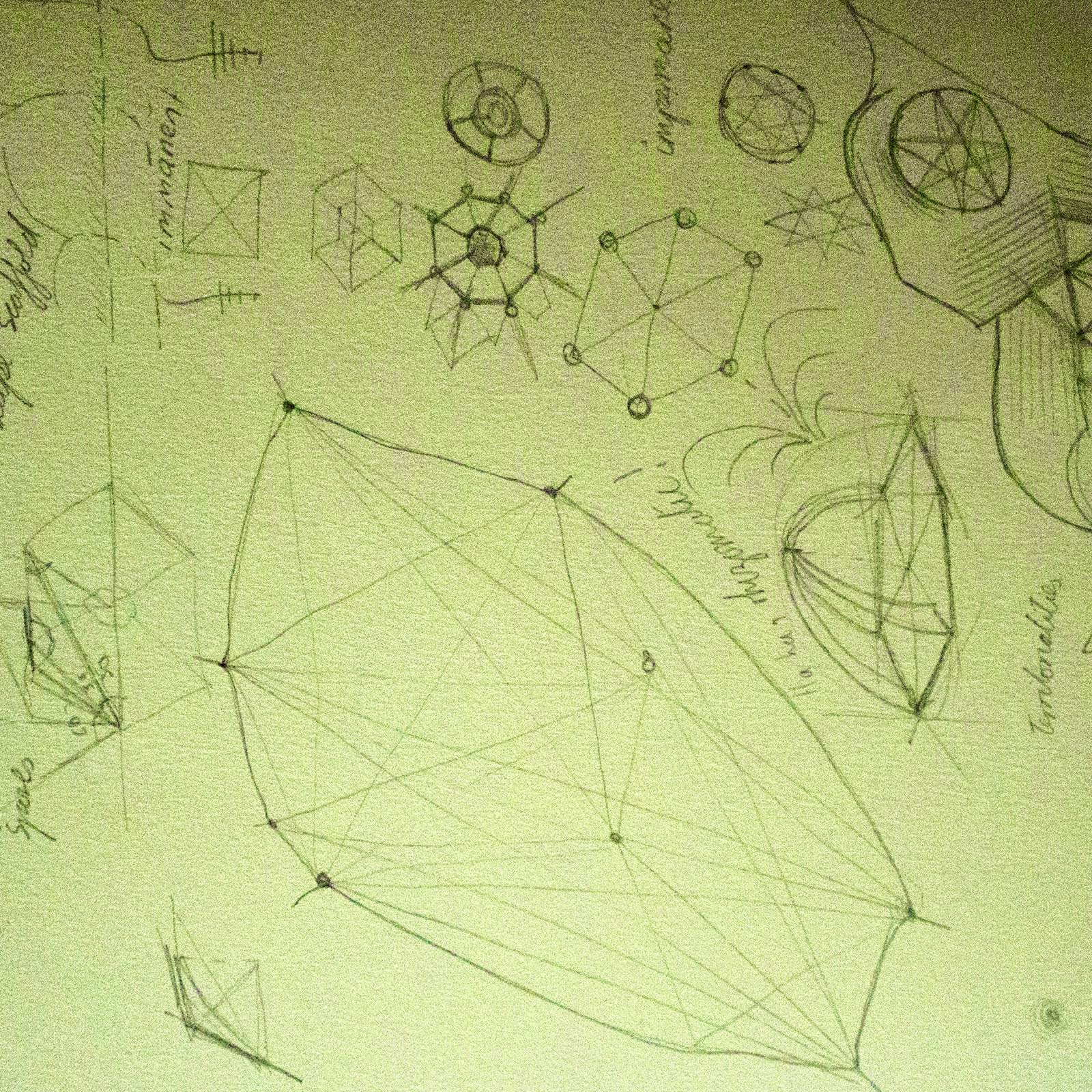 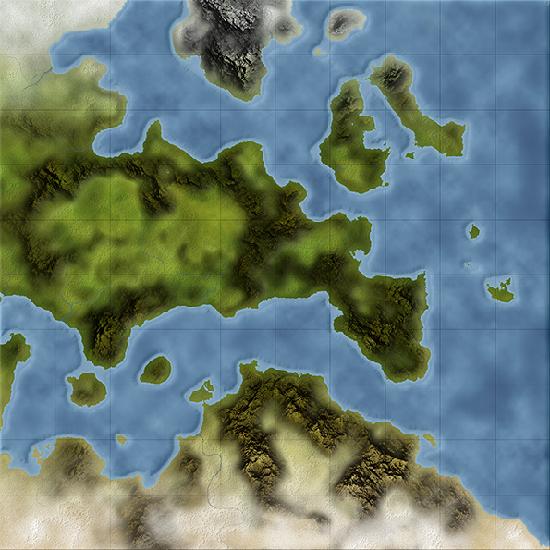